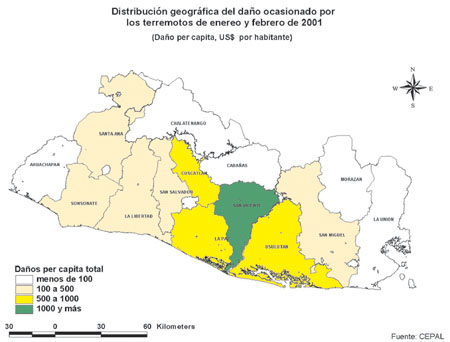 The impact of both earthquakes, their aftershocks and other secondary effects, in terms of damage per capita in the departments that were hit, can be seen in the following table:


This geographical distribution of damage per capita has both negative and positive implications. On the one hand, the damage caused by the two disasters concentrated in the geographical areas with the highest relative development in the country. Very broadly speaking, then, the affected population is more capable of recovering successfully than the people in the departments with the highest concentration of poverty in the country: Cabañas, Morazán, Ahuachapán and La Unión. Put different, the losses in human development did not affect more severely those departments where the greatest poverty was to be found. (map 2). 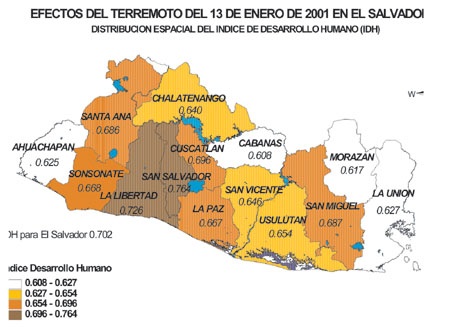 Also positively, the disaster will provide the opportunity to rebuild more effectively, so that the victims may end up with housing, production assets and livelihoods that are less vulnerable to other disasters that will inevitably hit the country in the future.

On the negative side, the modest advances achieved by the country as measured by several human development indicators will be affected in those departments hardest hit. In other words, the distribution of poverty may well have been affected. Moreover, rebuilding efforts will require that resources be concentrated in those departments that were most affected, and which happened to be the ones where the largest investments were already being made, postponing solutions for those areas that were less developed to begin with.

As far as the magnitude of the disasters in terms of the damage/GDP ratio, the departments that were worst hit were San Vicente (57%), la Paz (31%), Cuscatlán (22%) and Usulután (19%). In the case of these departments, the earthquakes caused the loss of a considerable portion of their annual product in a matter, literally, of a couple of minutes. 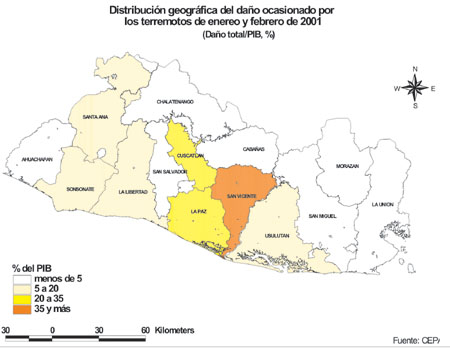 When looking at the macroeconomic impact of the second earthquake for 2001, one has to consider the effects on growth, inflation and the deficit, both in terms of the balance of payments and public finances. To the estimations produced after the January earthquake must now be added new loans from multilateral banking institutions to cover the wider gap between fiscal revenues and government expenditures. An additional US$336 million must be tagged onto the initial rebuilding costs, for a total of US$1.94 billion. It is currently estimated that annual investments of US$390 million will be required on average over the next five years for reconstruction and rehabilitation alone.

Put differently, the second earthquake increased the pressure on government finances and domestic savings and investment capacity. This significant increase in reconstruction costs will be met only to the extent that external resources can be mobilized in preferential terms through loans arranged chiefly through the Central American Economic Integration Bank (BCIE), the Inter-American Development Bank (IDB) and the World Bank.

Based on the estimated damage caused by the two earthquakes, three scenarios have been developed4 which can be summarized as follows:

RECONSTRUCTION SCENARIOS FOR
2001 AND THE FOLLOWING YEARS 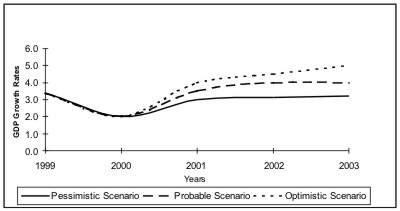 As already noted, reconstruction costs will exceed US$1.9 billion. In terms of economic policy, this makes the already formidable challenge posed by the first earthquake even more daunting. Additional resources will be required if the national reconstruction plan is to go ahead without overburdening public finances or generating additional risks of macroeconomic instability, and while preserving an adequate level of currency reserves and control over the costs associated with servicing the debt—all this without affecting negatively the productive capacity and employment of the country, already weakened by the earthquakes.

The second earthquake was more localized in its impact. It was therefore more directly related—in terms of employment—to the damage to the productive sector, particularly micro- and small businesses in San Vicente, Cuscatlán and La Paz. Based on preliminary data from several sources, the impact of the second quake on agriculture and the reassembly (maquila) sector was much smaller, and affected mostly rural and semi-urban cottage industries. Since women’s participation in family, micro- and small businesses is proportionately greater than that of men, it is also women who will be affected disproportionately by the disaster.

The second event, coming so soon after the first, called for new emergency measures, including far more costly and complex rehabilitation activities that had to be undertaken before the onset of the rainy season in May. Structural damage required a more complex and extensive response, particularly in the case of the Pan-American Highway, a vital conduit for the flow of Central American goods and people. It also created new vulnerabilities, especially the risk of rural communities in the Central Mountain Range becoming isolated due to new landslides during the rainy season. This called not only for immediate preventive actions but also for the search for alternate routes.

Damage to small and medium-scale production will also affect the ability of the productive sector to recover, depressing internal demand by increasing the proportion of the unemployed and those who have lost their livelihoods and businesses. The disproportionate impact on women also calls for specific projects targeted specifically at them.

Two disasters in a row have seriously challenged the capacity of the government and society to develop a comprehensive response strategy. If the first quake made it clear that the response capacity of the country had been overwhelmed by the severity and extension of the damage suffered, the second event lends a particular poignancy to the country’s appeals for additional resources, in highly favorable terms, if the country is to be able, in the foreseeable future, to deal with the daunting tasks imposed by the second earthquake of Tuesday, 13 February. 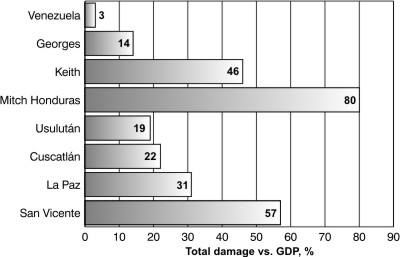 Once the figures—absolute and relative—are examined, it is possible to identify the particular characteristics of the double disaster. They are:

There are other aspects that require further consideration. Damage to assets corresponds to 40% of the gross annual formation of fixed capital in the country, making recovery alone a major challenge, and actual development—all things remaining equal—a far-off dream. Simply replacing the destroyed assets calls for a much greater investment than the face value they had at the time of the disasters. Estimates suggest that it will take no less than US$1.94 billion. The challenge to the construction sector is obvious, even should there be some unused capacity in this area. It will take between four and five years just to replace the lost fixed assets, while the population endures significantly degraded conditions.

Damage to transport infrastructure, meanwhile, is imposing longer distances and travel times both for goods and people, at a cost estimated at close to US$358 million. These greater costs will eventually have to be absorbed by the users, affecting the cost of living. The unforeseen costs placed on the government, both by the emergency itself and the reconstruction effort, will inevitably result in a greater deficit, even with the support of the international community.

Production losses account for less than 3% of the country’s total export revenues, suggesting that El Salvador’s productive capacity remains virtually intact. However, a significant fraction of the losses in production affected micro- and small businesses serving local consumers. In addition to the loss of income among these sectors, then, the lower availability of various products may call for their replacement by imports.

Finally, the twin disasters will have a negative effect on Central American integration as a whole, giving the tragedy a regional dimension. Damage to the Pan-American Highway has already forced the transport of people and goods to seek alternative, longer routes, making travel and the exchange of products more time-consuming, and increasing the cost of regional transport. Tourists from abroad have begun to cancel their reservations to visit the region, believing the damage to be generalized. And the Regional Strategy for the Transformation and Modernization of Central America, presented by these countries to the international community to support poverty reduction efforts, will need to be modified to assign a higher priority to vulnerability and disaster reduction without diminishing the attraction of foreign investment into the region.

2 It should be borne in mind that in 1988 Hurricane Mitch caused damages that were equivalent to 13% of the GDP of the entire Central American region. Consider also that if the Salvadoran construction sector were to focus entirely on the rehabilitation of damaged structures, leaving aside all other activity, it would be kept busy for at least four solid years.

4 The “pessimistic” scenario was based on reconstruction resources of US$150 million for 2001 and US$1.75 billion for the 2002-2005 period. The growth in real GDP is higher than that of 2000 but the smaller flow of resources for reconstruction in 2001 would be unable to energize the productive sector and would lead to a significant downturn of the main indicators. The “probable” scenario assumes US$380 million in reconstruction resources for 2001 and US$1.52 billion for 2002-2005. This would make it possible to double GDP growth in comparison with 2000, reducing annual inflation. The fiscal and current account deficits would grow as a result, respectively, of the new reconstruction activities and the increase in imports. It is estimated that the underlying deficit would be 2.7% of GDP, while reconstruction costs would reach 2.1% of GDP, raising the overall deficit in 2001 to 4.8% of GDP. The “optimistic” scenario is based on US$400 million in reconstruction resources for 2001 and US$1.5 billion for 2002-2005. GDP growth would increase, inflation would be reduced in comparison with 2000, and the fiscal and current account deficits would remain within judicious levels. All scenarios assume preferential terms for the loans, particularly low annual interest rates (7.5%) and repayment over 20 years with a 5-year period of grace.